Crypto winters are always easier for those who have been through them before — but this time it’s different. Even long-term builders and investors are discouraged.

Many are looking for inspiration at the infrastructure layer. They are seeing zero-knowledge cryptography progressing faster than expected; IBC emergent as a vibrant dAppchain ecosystem that has inspired other Layer-1s; NEAR Protocol achieving sharded execution; proof-of-stake at scale in Ethereum; new ideas in shared security emerging in multiple ecosystems.

At this early stage of Web3 development, innovation begets innovation, demanding further steps to safeguard decentralization. One such innovation, much discussed but rarely implemented, is quadratic voting.

This post will explain what quadratic voting is, and provide a case study in how it improves security in delegated proof-of-stake (dPoS) systems where concentration of stake is an issue. (Axelar recently implemented quadratic voting in a network upgrade.) We’ll also discuss applications in decentralized governance, DAOs, and in other stake-based systems.

These ideas and practical steps can serve as an example to show how quadratic voting — and perhaps other decentralizing technologies — can be implemented. Interested in exploring these ideas further? Join us at the Interop Summit, part of BUIDLWeek at ETHDenver, Feb. 27-28.

In Byzantine systems, decentralization improves security. To the extent sensitive functions are concentrated in the hands of a few, it becomes easier for them to be compromised, corrupted or seized by malicious actors.

As a result, proof-of-stake (PoS) and delegated proof-of-stake (dPoS) have emerged as consensus standards in Web3, replacing federated setups in the early generation of “Ethereum killers.” Today, most top-tier blockchains in Web3, including Ethereum, implement some form of PoS or dPoS to securely settle transactions worth hundreds of millions, daily. However, decentralized technology does not mean networks are decentralized, let alone secure.

Distribution of stake is the metric that reveals the extent to which a PoS or dPoS network is decentralized. When stake is concentrated among a few participants, the functions of the network are controlled by those few participants: security is in jeopardy. Ethereum itself faces this threat. According to Nansen, as of Jan. 20, four entities (Lido, Coinbase, Kraken and Binance) control more than half (55.7%) of staked ether.* 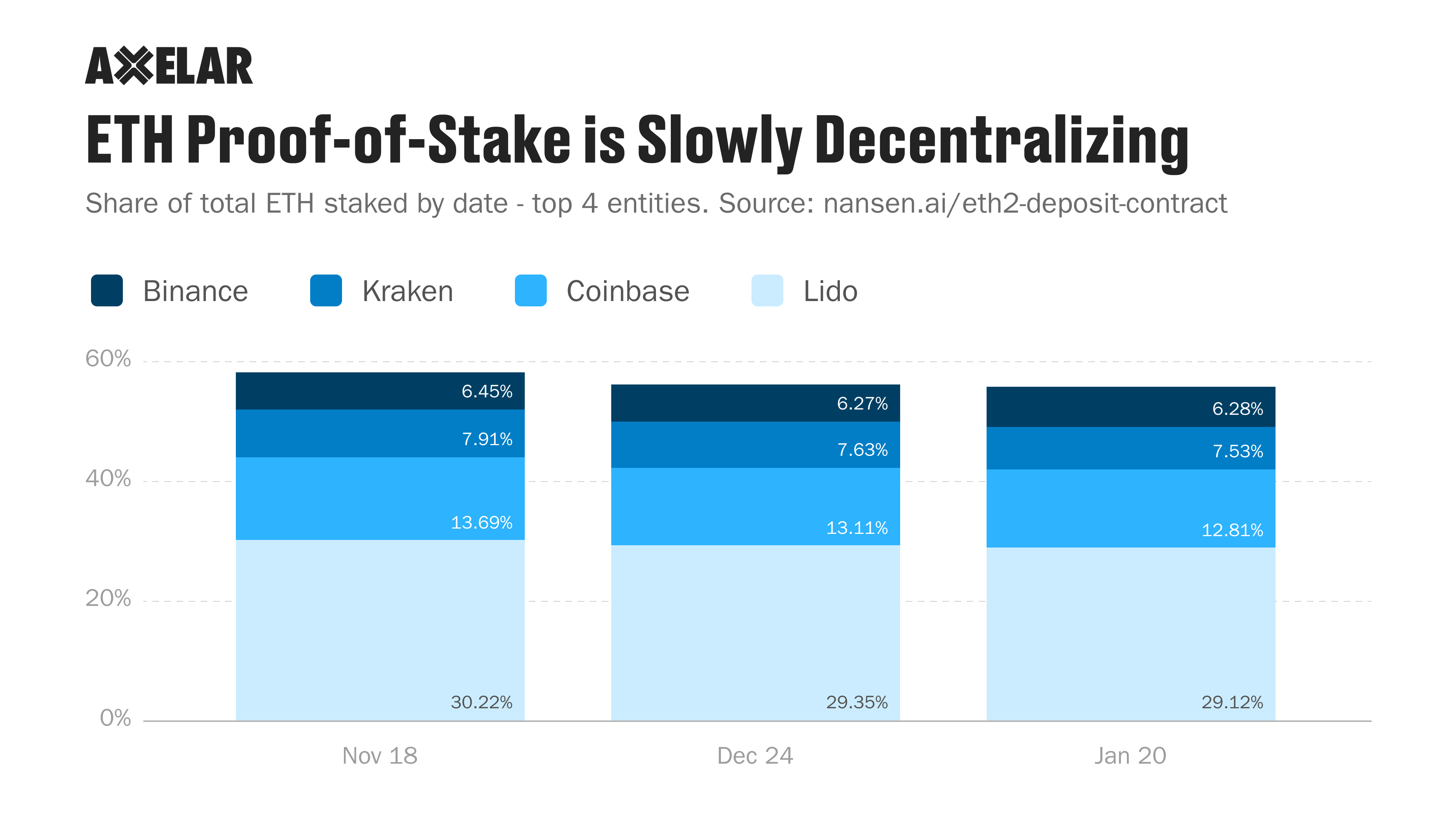 That’s a modest improvement since a snapshot I took on Nov. 18, when the same four controlled 58.3%. In early September, just over 60% of stake sat with the same four entities, according to Decrypt.

Is Ethereum decentralizing fast enough to avoid a major censorship incident? At this rate, these four entities will control less than half of Ethereum’s stake by about 2023 Q3. Loss of investment is one thing – even to fraud. A loss of faith in Ethereum as a permissionless finality layer would be a setback, indeed.

What is quadratic voting, and how does it improve decentralization?

In blockchain governance setups, quadratic voting is designed to even the distribution of voting power. For example, in PoS and dPoS systems, stake can become concentrated in the control of a relative few; when this happens, quadratic voting can keep decision-making decentralized. Here it is as a formula:

Most people are familiar with voting systems in which each participant gets one vote. Systems in which each unit of value (e.g., a share, or a number of tokens) is accorded one vote are also common. Blockchain-based governance is often set up like this, as are publicly traded companies, where one share = one vote.

Quadratic voting systems are like one share = one vote, except that participants’ voting power does not increase linearly with the number of shares (or tokens) they hold. In dPoS setups, quadratic voting sets each validator’s voting power at the square root of the total delegated stake it accumulates.

In blockchain governance setups, quadratic voting can mitigate scenarios like:

These scenarios may affect governance votes in a DAO, much as they do in traditional corporate governance equivalents. In dPoS and PoS systems, they pose greater risks, as stakeholder governance is instrumental to the day-to-day operation of key functions on the network. Quadratic voting is a potential safeguard against some, but not all, such scenarios.

Despite enthusiasm for quadratic voting among Web3 leaders, including Ethereum co-founder Vitalik Buterin, it hasn’t been widely adopted. The best-known implementation is probably Gitcoin, a project for funding open-source development, which uses quadratic funding, an adaptation of quadratic voting that uses matching grants to multiply the funding for projects that attract more individual voters.

It may be that quadratic voting isn’t necessary for layer-1 smart contract platforms implementing dPoS or PoS. Cosmos, one of the most mature dPoS blockchains, is an encouraging example: the largest validator’s voting power is just over 6% at time of writing, according to the Mintscan block explorer.

In Ethereum’s PoS system, Buterin and others have discussed quadratic voting as a means to improve decentralization in governance votes at the application layer — and to approve or reject changes at the protocol layer. However, it’s not clear how quadratic voting would apply to transaction validation in Ethereum’s PoS implementation. How would it affect block rewards? How would Ethereum resolve nodes into operating entities, without relying on a heuristic blockchain forensics system such as Nansen or Chainalysis? Even the basic concept of voting doesn’t neatly map to the process by which Ethereum node operators include transactions in blocks.

Axelar network establishes secure interchain communication. Here's how it works: validators operate light clients on connected chains, verifying state on each. Axelar validators choose which connected chains they serve, so that the network can scale to thousands (even millions) of chains — too many for a single set of validators to span. This sets up a potential hierarchy of validators and centralization of stake: validators that connect more chains deliver greater rewards, and thereby are likely to attract more stake.

This is why Axelar’s most recent upgrade, code-named Maeve, implements quadratic voting. The best validators may attract more stake, without concentrating voting power in a small number of leading validators. Today, Axelar provides secure interchain communication across dozens of chains. Some day the number of connected chains will grow to the thousands, or even millions. Quadratic voting prepares Axelar for that future.

In past bull markets, centralized applications have stood in as shortcut onramps. Building decentralized systems is hard. Existing infrastructure hasn’t been adequate to handle fresh waves of excitement for blockchain-based technology. Using decentralized technology is like trying to use email must have been … in the 1980s.

These shortcuts are fine – if the goal of Web3 as an industry is only “number go up.” If the goal is to create products that improve on Web2, builders must always look for ways to further decentralize and secure systems against censorship and attack.

Every project, from the most critical and widely used infrastructure (Ethereum) to the smallest DAO, should look for ways to apply technology that will push their project in this way. Quadratic voting isn’t necessarily applicable – or even desirable – in all networks. In many cases it can be one of those decentralizing technologies. At minimum, concentration of voting power is something that all networks must consider.

Applying decentralizing technology is the only way to create products that convey to the user the benefits of a permissionless blockchain. We’re presenting our ideas about quadratic voting and our implementation of it here, in hopes that the information will be helpful for other Web3 projects seeking to maximize decentralization.

Thanks to John Kelleher for helpful feedback on this post before publication. (All mistakes are mine, of course.) Read further on quadratic voting in a paper by Vitalik Buterin, Zoë Hitzig and E. Glen Weyl.

*Oddly, on the three dates I captured, Nansen reports Coinbase’s ETH staked at the same number, 2,066,976. I’ve sent two messages to Nansen support asking to check the data. They've replied to say they are not aware of any problem with the data.

Axelar wraps up and reviews its first year on mainnet, and looks ahead to what's to come on the network that is pioneering interchain infrastructure.